This is part of a series of posts highlighting the art fair and festival industry. Know someone we should talk to? Email your suggestions!

Those who know Larry Berman only in the fairs and festivals industry might be surprised to know how he made the transition from a college student considering a career in music to artist resource. Although he purchased a top-of-the-line acoustic guitar upon graduation from Queens College in New York, Berman soon immersed himself in photography after realizing that he could make a living from his photos. Following this decision, he became a successful photographer, showing at many festivals, and is now working as an arts consultant.

Berman became a staff photographer for the New York Nets basketball team and also shot concerts featuring rock musicians like Bob Dylan, Eric Clapton, Paul Simon and The Beach Boys. The day after photographing a show, he would market and sell his work on the street, making him even more driven and motivated to keep taking pictures. Berman later contracted with different magazines, especially for sports photography, and even had a photo featured in Newsweek.

As Berman’s photography career progressed, he continued to shoot other subjects which interested him and found that there was a market for his own work as well. He developed a body of work that initially consisted of monochromatic landscapes and saw that he could make money selling his pictures at art shows. He never considered submitting work to galleries or museums, but he knew that good, original work was easy to market at art festivals. In those early years, Berman was motivated and entirely self taught. He would read a lot, ask questions, and do other research required to learn how to do well as a professional photographer. 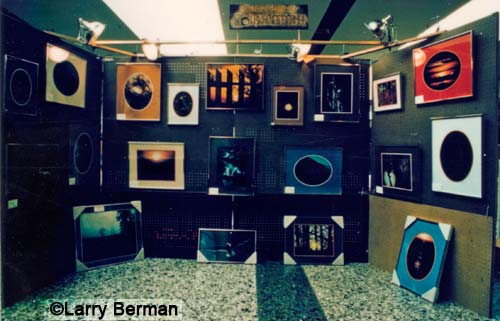 Berman began to sell his work solely at outdoor art shows in 1977 because he believed that the people who created work solely for outdoor art shows were the artists with the best sales. He’s done more than 1,000 art fairs since! That’s not to say that he wasn’t always coming up with something new and creative, though. Berman admits that he was unsure if he has ever considered himself an “artist,” although he has always been recognized as one because he always had work that was different from the work around him. “As long as it’s something that nobody else is doing, it makes people look at you like you’re an artist,” he says.

Now Berman has two main bodies of photography that he continues to work on, and additionally works with artists to photograph their own artwork for art show juries. Berman has always seen this peripheral consulting business as an opportunity for him, especially because of his extensive knowledge about photographic technology. He was a beta tester for Photoshop in the early 2000s, and when the jury process turned digital, he became the go-to guy for all his friends by helping them scan in and color-correct the new digital images created from their slides. The kind of service he offered became a business overnight.

Berman reminisces about the early days of art shows when he says it was like a family, and he thinks the ease of online application processes have increased competition. For shows to continue to thrive, he thinks that shows need to become smaller and lower their booth fees to make participating more affordable. Another threat that artists should be more concerned with is global warming and how it’s affecting outdoor art shows. On the other hand, Berman doesn’t see a threat in online art-buying because he doesn’t believe that the people who shop online would be attending art shows anyway.

Larry Berman maintains that as more processes become available to artists and more ways to create work and new types of work are introduced, it will become increasingly difficult for artists to describe their craft. To this, he offers a timeless piece of advice: “You have to be original and you have to grow within your medium and it has to show in your work.”

–By Anna Charney
Anna Charney studies studio painting and drawing at The School of The Art Institute of Chicago. She is a Denver native and decided to spend her 2013 summer back at home hanging around the ZAPP offices as an intern to learn about the arts festival business. While they share a last name and an excellent fashion sense, she is not related to ZAPP’s managing director, Leah Charney. You can see her artist’s gallery at www.annacharneyart.com.

Larry Berman is a presenter at the upcoming Arts Festival Conference taking place October 7-8, 2013, in Louisville, Kentucky. See the line-up of great sessions and speakers at bit.ly/zappcon or in-person this October by registering now!